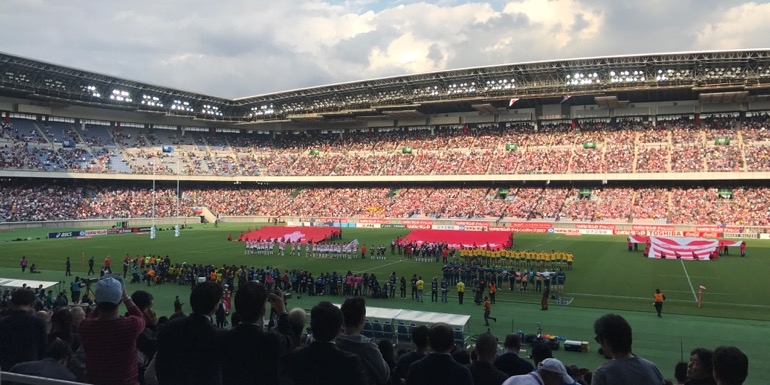 It's all go in Japan

The highly anticipated match schedule for the Rugby World Cup Japan 2019 was finally revealed last week, to the delight of rugby fans the world over.

The theme of the 2019 tournament is unity, with rugby players and fans from countries traditionally associated with the sport such as New Zealand, Australia, England and South Africa coming together with players and fans from Japan (and Asia) to create Asia's first major rugby tournament, in a bid to turn the game of rugby into a global sport.

Traditionally, the RWC tournaments have been held in countries where rugby is very popular, like in New Zealand.

The Japanese National Tourism Organisation hopes the tournament will give the host cities an opportunity to promote themselves to the world, bring travellers back post-tournament, and showcase parts of Japan that aren't Tokyo or Osaka.

The host cities will play a central role to show rugby fans from all over the world different parts of Japan, with the Japanese National Tourism Association working hard to show off attractions and experiences around the country that can coincide with travellers visiting Japan for the tournament.

'For those interested in Japanese culture, this a really cool experience, because not only do visitors get to explore the host cities and experience Japan, they also get the rugby as well, which has a really exciting atmosphere,’ says Jenifer Tanikawa, translator and communications, Rugby World Cup Organising Committee.

The Rugby World Cup 2019 logo incorporates the rising sun and Mt Fuji, both iconic Japanese symbols, together with the World Rugby logo.

The games will take place at 12 venues across Japan, with 20 teams from across the world participating. The tournament is made up of four pools, each with five teams, with each team meeting all the teams in the same pool, for a total of 40 matches. Quarterfinals, semi finals, bronze final, and final will make up eight matches.

Tweet
More in this category: « Riding high in Victoria Tarutao's sinister past »
back to top