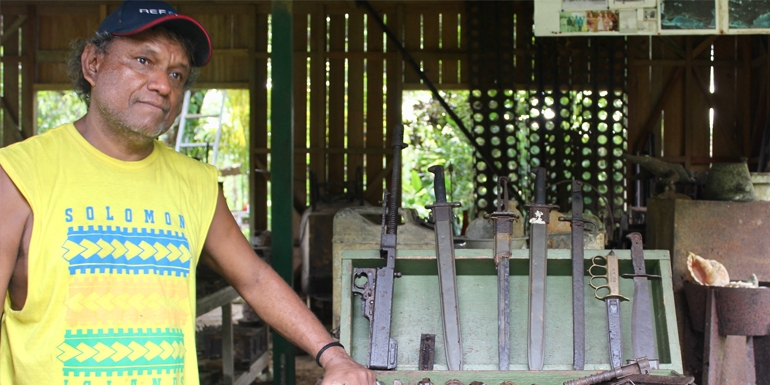 Evidence of the heavy fighting between Japanese and US forces can be found all over the Western Province region of Munda.

Many of the remnants from foxholes and battle strongholds find their way to Barney Paulsen’s Peter Joseph WWII museum. Peter Joseph Palatini’s ‘dog tag’ was the first artefact of what is now a huge collection in Paulsen’s dirt-floored shed. But it could be argued that Paulsen’s interest in war memorabilia began long before the 2002 discovery of that first dog tag. As a boy in the 1970s, Paulsen would help his uncle search for brass and other metal for overseas scrap metal dealers.

Much of what he has collected has come from the hill behind his house: oxygen bottles, artillery, shell and bomb casings, hand grenades, dozens of helmets (both Japanese and American) and coca cola bottles complete with the city of origin stamped on them. But it’s the personal items that give cause for pause – cigarette cases, personal insurance cards, razors, toothbrushes, marbles, first aid kits, and even still-sealed tubes of morphine and sterile sutures. Paulsen has repatriated many of the dog tags to families of the soldiers. He has a wealth of knowledge of WWII action in the Solomon Islands. He identifies war sites, even the site of an underground Japanese hospital, on the map in his museum. Paulsen charges SB$50 ($11) per person to visit the museum, but he also offers a two to three hour war history tour (by foot and boat) around Munda for SB$300 ($70) per person.