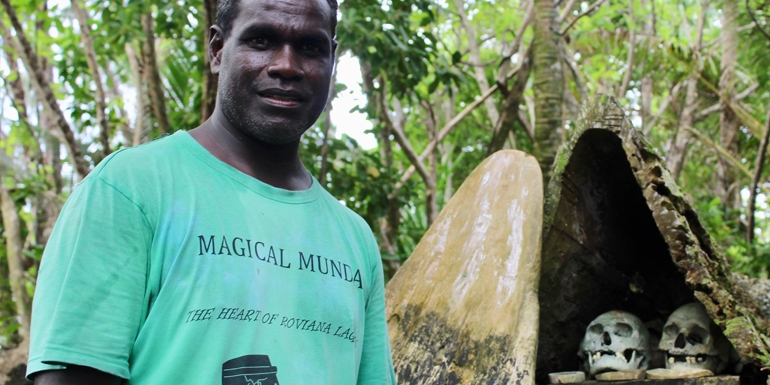 Visitors to Skull Island are advised to wait until the boatman sings his prayer before alighting the boat.

Stories abound of those who have stepped ashore before respects have been paid – strange afflictions requiring the aid of village women with special healing powers. Don’t be put off though. Skull Island, as the name implies, contains skulls and graves but it also offers an insight into the local history and customs of the area.

The tiny island is actually a repository for a collection of skulls that were relocated from New Georgia Island when the missionaries arrived and proceeded to dismantle many of the local traditions. One of these traditions was to sit the bodies of the dead against a tree and wait for them to decompose naturally before burying the body and placing the skull in a special shrine. Ordinary people had their skulls placed at the bottom while the skulls of chiefs were placed at the top. Trips to Skull Island can be organised by accommodation providers in Munda and on nearby islands.

Tweet
More in this category: « Backyard World War II relics Make it Madikwe »
back to top