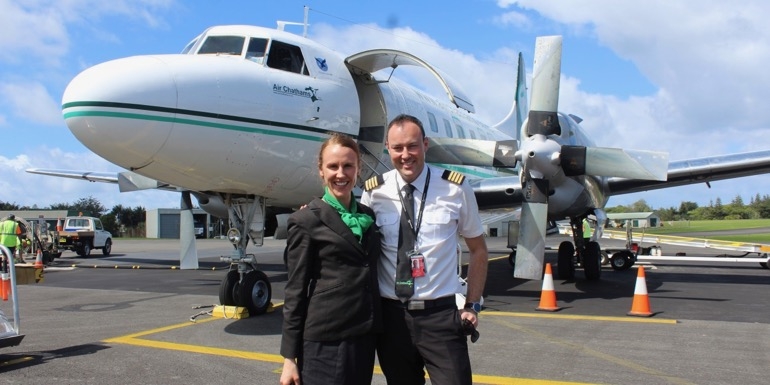 Air Chathams is already aiming for a second service to Norfolk Island following the launch of its weekly flight on Friday.

‘Historic data from when other airlines operated the route (including Air New Zealand) indicates that is very possible,’ says Air Chathams general manager Duane Emeny who draws parallels with the airline’s Chatham Island services.‘We have been

operating to one of New Zealand’s most isolated island communities for 35 years, giving us good operational experience with the right equipment to succeed,’ he says. ‘Our schedule is starting very conservatively with only one return flight each Friday. It is our intention to build the service over time to at least two return weekly flights.’

The arrival of the inaugural flight on NLK flight arrives to applause, second service plannedFriday has put a spring in the step of Norfolk Islanders who cheered and clapped the flight in from the airport’s boundary fences as it landed. Local businesses are looking forward to the return of what was 15% of their tourism market.

Since the loss of the Air New Zealand’s Auckland service, Kiwi numbers have dropped to 4-5% of the tourism market, says Rose Evans, team leader tourism and economic development on the island. ‘This still indicates that New Zealanders are willing to travel longer and spend more money to get here,’ she says. ‘Our community is excited and supportive because New Zealand is an important part of Norfolk Island’s tourism.’

Initial capacity on the route is 41 passengers ex AKL departing 9am on Fridays, and returning from Norfolk at 11.20 on the same day with a lighter fuel load allowing up to 50 passengers.The inaugural flight was flown by father and son team, Craig (Air Chathams founder and owner) and Duane Emeny

Tweet
More in this category: « Port Vila’s airport extends reach May the Force be with LATAM »