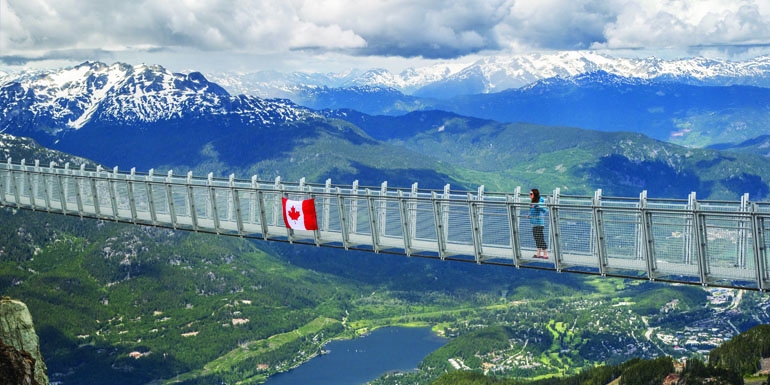 Whistler’s newly named Cloudraker Skybridge will open year-round (although it will only be accessible to skiers and snowboarders in the winter.)

The bridge spans 130m from Whistler Peak to the West Ridge over Whistler Bowl to the Raven’s Eye Viewing Platform, a 360-degree sightline of the Coast Mountains. The West Ridge Lookout will consist of a viewing platform with 360° views from Whistler’s Peak. There are 101 bridge modules that connect to form the bridge itself, each weighing approximately 500 lbs.

The suspension bridge is just one of six construction projects underway on Whistler and Blackcomb Mountain this summer as part of a $66 million dollar investment by Vail Resorts announced in December 2017. A new Blackcomb Gondola, Catskinner and Emerald Chairlifts, Roundhouse Patio Deck, Umbrella Bar and lateral Via Ferrata over Harmony Bowl will all be up and running when the mountain opens for winter 2018-19. www.whistler.com/blog/post/2018/07/05/whistler-peaksuspension-bridge/

Tweet
More in this category: « Buenos Aires and Beyond Ancient Peru ‘more accessible’ »
back to top