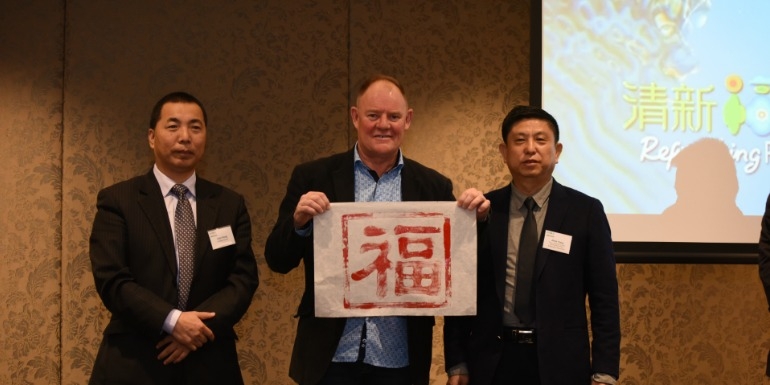 The Fujian Tourist Administration invited a range of agents and industry to a special breakfast in the Crystal Ballroom at the Langham in Auckland last week as it looks to promote the Fujian Province in China and strengthen its New Zealand relationships.

Agents were treated to a breakfast and presentation, with two lucky agents from Flight Centre winning the business card draw for a six-day trip to Fujian, on business class flights courtesy of China Eastern. Situated on China’s southeast coast, the Fujian Province has a population of 38 million. It has six airports, almost 400 star-rated hotels including 31 fivestar, and dozens of travel agencies. The province is China’s tea capital, and agents were treated to a special traditional tea ceremony. It is the greenest province in China, and boasts an abundance of Buddhist temples, Christian churches and mosques. The province is famous for it Tulou architecture, which gained attention during the Cold War due to the unorthodox and strange appearance of the buildings. While there is no direct flight services from New Zealand, China Eastern Fujian hosts New Zealand agents Airlines have direct service from Auckland to Shanghai, and offer frequent flights from there to Fujian/Xia Men. Speaking to agents, Yang Jimin, division chief, Fujian Provincial Tourism Administration Policy & Regulation Department urged agents to put Fujian on their maps and visit regularly. John Hong, head of investment and international relationships at Auckland Council, says the council has worked hard to further extend its relationship with the province. ‘We’re really passionate about introducing the characteristics of Fujian to New Zealand.’

Tweet
More in this category: « Ready, set Japan - RWC travel plans Going round on cycles »
back to top