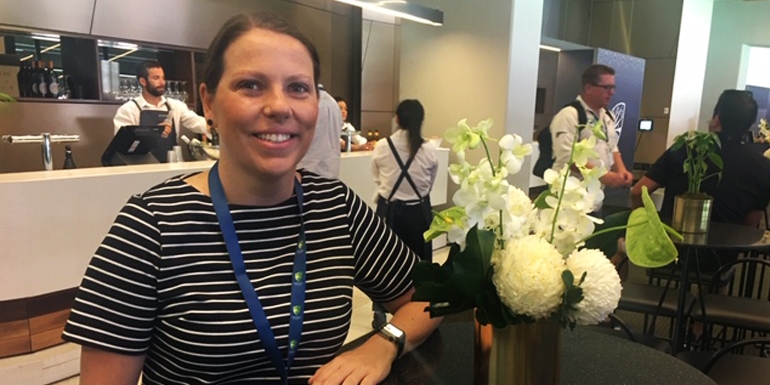 Joanna Garrie at the Boxing Day cricket test in the MCG

Working with the travel trade to put together an extended selection of three to five-day packages is one of the goals of Visit Victoria this year, says the organisation’s regional manager New Zealand, Joanna Garrie.

There will also be ongoing efforts based around major events – timely following a Boxing Day cricket test that attracted tens of thousands of Kiwis to the MCG in Melbourne a couple of weeks ago. The Boxing Day crowd numbered 80,473, the second biggest non-Ashes Boxing Day numbers in history. Garrie points out that cricket – in the shorter T20 form – is likely to be a big drawcard for New Zealanders again as this year progresses. The T20 Women’s World Cup is coming in March and organisers are hoping the final at the MCG on 8 March will attract a world record attendance to any women’s event. That would need to put attendance up around the 90,000 mark.

Then, in October, the men’s world tournament is being held and Garrie says that in both events a number of key match-ups involving the Kiwis are being held in Victoria. Melbourne will also host Bledisloe Cup rugby in August with the regular events such as the Australian Open tennis, Grand Prix, AFL football etc rounding out the sporting calendar. On the cultural front, Harry Potter and the Cursed Child continues its run in the city and is expected to run ‘for years’, and Moulin Rouge starts a season in 2021. Garrie says major events are a key driver in what is increasingly becoming a short stay holiday market. ‘We really noticed the trend in 2019 and we are encouraging the trade to develop packages that fit this – work of the back of airfare deals and sell more experiences – be it events, trips into the regions, laneways walking tours, or food and wine experiences.’

Visit Victoria’s trade and consumer promotions for the year ahead are taking shape, with a number of key activities announced already. Joanna Garrie, New Zealand regional manager with Visit Victoria, says a regional campaign aimed mainly at the 55 plus market will launch in March. ‘Regional Victoria aims at semi-retirees and retirees, particularly those with time to self drive. We will have packages out with some of the main wholesalers around that.’ She says a new winter campaign will be revealed in May. ‘It will be across Australia and New Zealand but there will be specific attractions for the Kiwi market,’ says Garrie. ‘Victoria is not really seasonal but we could see a lag in winter without many major events planned for that period.’

She says one way the state will combat that is by creating a new event – an arts and cultural event in late August that is yet to be named. ‘The key ingredients in the campaign will be celebrating the indoors – shopping, theatre, galleries and other activities.’ Melbourne hosts the Australian Tourism Exchange (ATE) in May and Garrie says this has prompted Visit Victoria to push its trade and consumer mission to New Zealand out to July. This is likely to attract 20 Victorian suppliers after a strong response in 2019. Melbourne-based Garrie will be in Auckland later this month to catch up with airlines, wholesalers and other partners, and then follow up with a visit to attend an Aussie Specialist planning session in March.