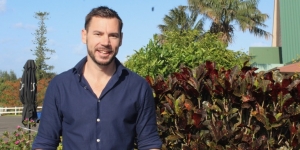 When Benny Ford opened The Black Anchor Bar in Norfolk Island last November, he filled a gap in the market. He opened a casual bar where people could relax after work, with a cocktail, craft beer or wine. Open Thursday to Saturday from 5pm till midnight, The Black Anchor serves  ‘pop up’ bar food from offsite caterers – dumplings on Thursdays, tacos on Fridays and American barbecue food on Saturdays.

The Black Anchor is a fitting name for someone who has worked for 20 years as a sea captain, and grew up on boats. Doubling as port manager by day, Ford has lived on the island for three years. ‘Norfolk Island is the place that everyone in Byron Bay