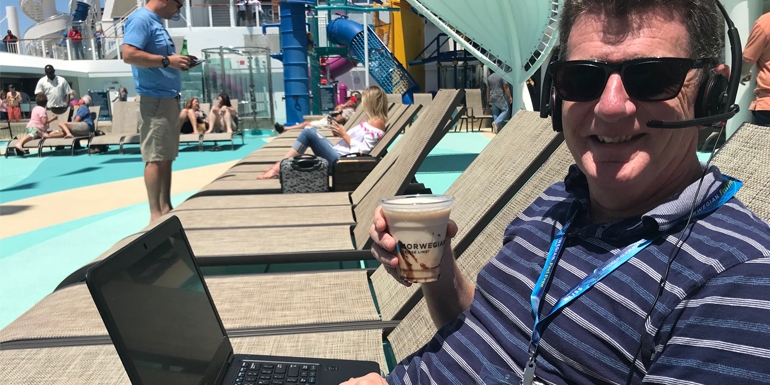 Always on the job… well, someone has to be – Jeff Leckey, Cruise Champion finalist and general manager cruise with House of Travel on Norwegian Bliss

A stalwart of New Zealand’s cruise industry says a lack of home porting in New Zealand presents a challenge to the industry here in coming years.

That said, Jeff Leckey, general manager cruise with the House of Travel Group, sees plenty to be happy about when it comes to Kiwi cruising and cites the New Zealand deployment by Dream Cruises this summer as an example of the growth such a move can generate.

‘It has attracted a staggering amount of new to cruise guests. This bodes well for the future as they come back to cruise again in other destinations.’ Leckey is a finalist in the Cruise Champion, Australasia category of the Cruise Industry Awards, being hosted by Cruise Lines Industry Association (Australasia) in Sydney on 15 February. He is the only New Zealander in the final four and has not been successful in that particular category before. However he has won a couple of ‘CLIAs’ for Agency Promotion of the Year – New Zealand when he owned a HOT retail agency in Nelson, and last year shared in the success when HOOT Cruises won Online Travel Agency – New Zealand last year. It is one of the finalists again this year. Leckey says the upgrading of locally based hardware with the arrival of Carnival Splendor and later this year Pacific Adventure, are other developments showing this region has come of age, with cruise lines making large investments in the local market. ‘I do see a blip in 2021 though, as we have no ship home ported here for the winter. That’s a challenge when we are trying to grow the market.’ On the plus side, he points to the opening of the new Brisbane cruise terminal. ‘This potentially opens up lots more exciting opportunities to get in to the likes of New Guinea and the Solomon Islands, which will keep the repeat cruisers happy.’

Leckey says the growth in expedition and small ships is attracting more Kiwis to try this style of cruising. ‘Kiwis love the sense of adventure that comes with a small ship, and the attraction of getting up close and personal with the destination.’ He says online training offered by CLIA is continually evolving to keep pace with the industry. ‘I believe the successful cruise consultants of tomorrow will be the ones who keep up with changes by investing in themselves through ongoing training.’

Tweet
More in this category: « Arctic EBD on Ultramarine Commission opps for land-cruise »