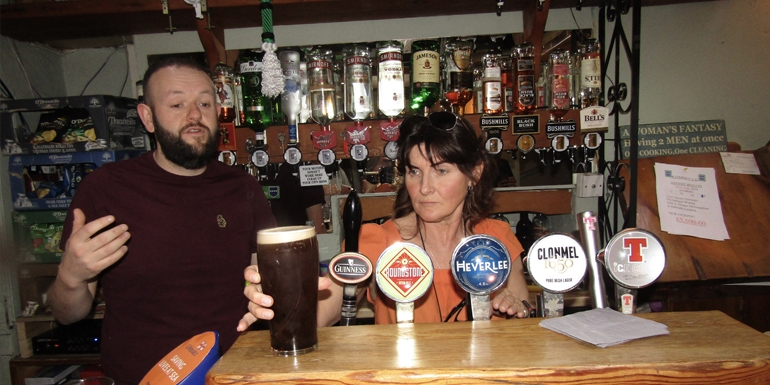 The power of film tourism

Mary McBride’s Bar, in Cushendun, County Antrim reports that about 1000 people a week are now coming through its doors as a direct result of Game of Thrones – and 75% of them buy a drink or something to eat while they are there.

The bar has one of the 10 Game of Thrones doors that are dotted around Ulster – each depicting a different scene, but more importantly is walking distance from the Cushenden Caves, used in a couple of scenes. ‘The caves themselves sometimes attract 10 tourist buses a day,’ says pub owner Cormac McKeegan. Blue badge guide Dee Morgan says the caves are part of a ‘road less travelled’. ‘This is a stunning landscape in its own right, quite apart from Game of Thrones. People who live here just regard it as another beautiful place and up till now it has only been visited by travellers really seeking the area’s nooks and crannies. ‘The series has brought more people here but you still won’t be overwhelmed by visitors.’

Meantime McKeegan has a drawcard of his own – the chance for guests to pull a pint of Guinness. He has written instructions and will guide people through the process – a certificate is rewarded to successful pourers as a souvenir. (Most people don’t keep the actual Guinness for long.) For GOT enthusiasts the caves are where Davos Seaworth smuggles the red woman Melisandre to a cove below Renly Baratheon’s camp. There she gives birth to a ‘shadow baby’ that goes on to kill Renly. Much later in the series it is where Jamie Lannister and Euron Greyjoy have their final fight.

Tweet
More in this category: « The Titanic Experience Ballygally: Ghost hunters »
back to top