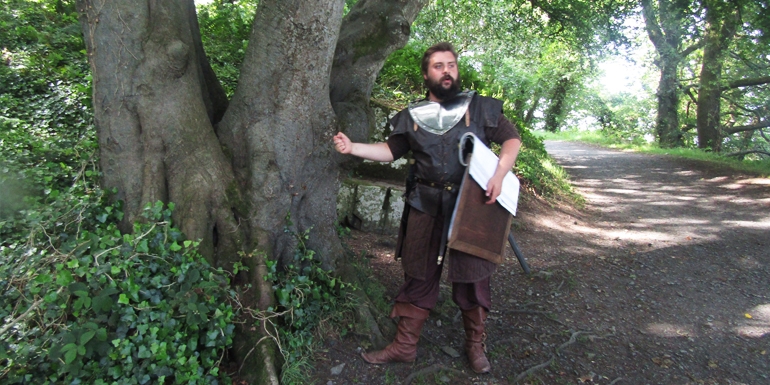 The way Northern Ireland has embraced Game of Thrones and capitalised on fan mania around the show is easy to see at Castle Ward in Strangford.

The castle was used as Winterfell, home of the Starks and one of the most important locations in the series, and despite the computer generated enhancements enthusiasts will get a wave of recognition as they walk through the gates. In reality the site has been home to the Ward family since the 16th century and the mansion house dates back to the 18th century. The husband and wife of the time could not agree on a style for the building, so it is half gothic, half classical. It is set on a hillside overlooking Strangford Lough (Strong Fjord), surrounded by 820 acres of walled in gardens and woodlands. It is now a National Trust property and open all year round to visitors. So it is a nice place to be anyway, but GOT has inspired a few touches – including a Winterfell beer to enjoy over a medieval style lunch, archery, plus tours by guides who are dressed for the part and even actually had a part in the series. Robert Brown, for example, had four different battle related roles and happily recounts his experiences on set. ‘I didn’t have a dialogue, I pretty much screamed and died.’ It adds a personal touch while visitors are taken around various sites – ‘This is where Tyrion and Bronn walked into Tywin Lannister’s camp’; ‘Here is the hanging tree in the scene with Brienne of Tarth transporting Jamie Lannister for trial’, etc. A highlight if it can be organised for clients is the opportunity to meet a couple of Direwolves – Summer and Grey Wind (not their real names) and their owner Will Mulhall – another walk on walk off GOT guy from Northern Ireland, who has visited New Zealand and enjoys chatting to Kiwis.

Tweet
More in this category: « New: Spain by train APT's three-star brand »
back to top