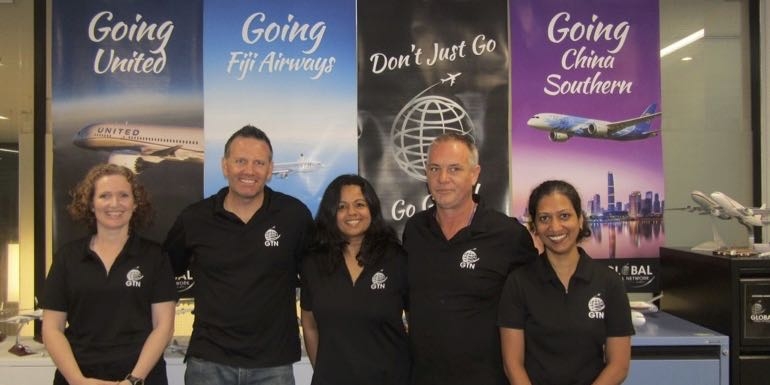 With a growing team in place and a full calendar year of operation behind it, Global Travel Network (GTN) is looking towards further growth, more famil tours and its first national conference in 2017.
Director Rob Beecher says the conference will be held at Rydges Rotorua on 28 to 30 July and some 100 agent delegates, plus suppliers (25 already confirmed) will attend.
‘The time is right to be looking head to our first conference,’ says Beecher. ‘In the last 12 months we delivered on our promise of four famils (a Fiji Cruise, Thailand, Sydney and Whitsundays) and we will be doing another four in the year ahead. So the

conference is just another sign of coming of age.’
Beecher says GTN recently added a new member to the team, Sonya Francis who has come from Emirates. She joins Beecher, fellow director Allen Bell, Jeni Wharepouri and Tania Gomes, both formerly with helloworld.
‘Our first year passed expectations and we’re grateful for the support of House of Travel and from our agents and suppliers. We are well aware that all of our agents took a punt when they signed with us last year and now they are reaping the rewards for that early loyalty.’
He says in terms of new agents, the latest major development was the arrival in December 2016 of the Aspire Travel Group under the GTN umbrella.
‘Anther important development was the release of GTN branded brochures covering 30 destinations. That’s something our agents really wanted. We’ve also got branded posters.’
Beecher says regular meetings with agents are another key aspect of the GTN operations.
‘We catch up every two months and provide direction on how they can maximise their earnings. At GTN we are New Zealand owned and operated and truly independent and these meetings give us an opportunity to share the values that come with that.’

Tweet
More in this category: « Franchise ownership grows Marriott on a mission in NZ »