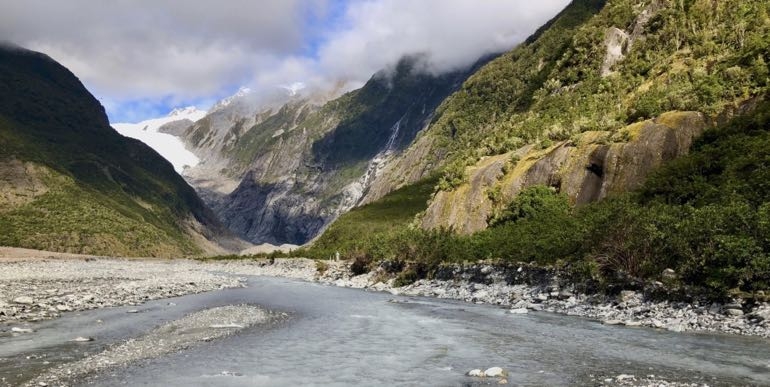 Park and ride for Franz Josef?

Franz Josef Glacier is a key example, she says. ‘Last summer the rangers there were spending more time managing road cones and traffic flows and preventing road rage when people couldn’t find a car park, than spending time interacting with visitors.’
The glacier jam will have been exacerbated with last week’s washout of the neighbouring Fox Glacier access road, just after completion of a $1 million, two-month repair job from a similar washout in January.
The minister spoke of the successful park and ride model introduced in 2017 for the Tongariro Alpine Crossing, whereby visitors were encouraged to park in nearby towns and use shuttles. Kaitiaki rangers were also appointed to support visitors on the track,
a move credited with improving understanding of the cultural and natural values of the mountain, and cutting the number of search and rescue call outs compared with previous seasons.
Minister Sage says the department is now considering a similar approach at Franz Josef Glacier. ‘DOC is working with businesses and stakeholders and the Franz Josef community to establish long-term solutions, particularly in the area of park and ride.’
The Tongariro kaitiaki model also has wider applications for helping ‘vulnerable visitors’, she adds.
‘We have an increasing number of people who could be called ‘vulnerable visitors’, who are motivated to get into the outdoors but lack the skills and experiences to be in the places they go.’
Minister Sage says one such example was Fiordland’s Gertrude Saddle, which is relatively accessible and has a high social media profile as a ‘must do’ experience, yet someone has died there each of the past two years.
‘DOC is having to respond by putting more effort into managing visitors (in these areas), helping them understand the natural hazards, and helping them make good choices about what they do.’