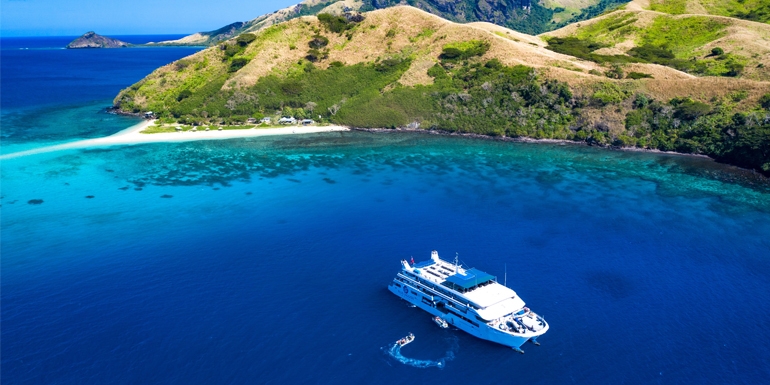 Specially created itineraries around Blue Lagoon Cruises’ 70th anniversary give agents a chance to take a fresh approach to one of the Pacific’s most popular products, the company says.

Three itineraries, including one with two departures specifically for repeat customers, plus an anniversaries special for cruisers celebrating their own special occasion, have just been launched into the market. BLC general manager global, Alyssa Field says the Kiwi trade should also watch out for the relaunched and refreshed agent accreditation programme before Christmas. ‘It will include opportunities to reach targets, gain rewards and receive CLIA points,’ she says. In addition the 2020-21 Blue Lagoon Cruises brochure will land in stores in the New Year. General manager marketing, Sonya Ridley says the anniversary itineraries give the trade something exciting to sell. ‘We wanted to create some talk that’s not just around price specials.’ The seven-night returnee cruises depart 25 September (family cruise) and 20 November (adults only).

Field says they provide the opportunity for agents to contact previous BLC cruisers and offer them an itinerary that visits favourite locations as well as places that are not on the regular cruise. ‘We have a huge returnee clientele and they are often asking for different things.’ Also launched to mark the anniversary are a four-night Villa Maria Wine tasting cruise, departing 26 October; and a seven-night Photograph the Fiji Islands cruise, departing 13 November.From 1 April to 31 December, guests celebrating their anniversary while on board will receive a special anniversary package that includes a candlelit dinner for two on the beach at Nanuya Lailai, a celebration cake on the day of their anniversary and commemorative champagne flutes as well as a bottle of French sparkling wine. CLICK HERE for more details.

Tweet
More in this category: « New Cal’s self famils Vomo rocks for couples »
back to top