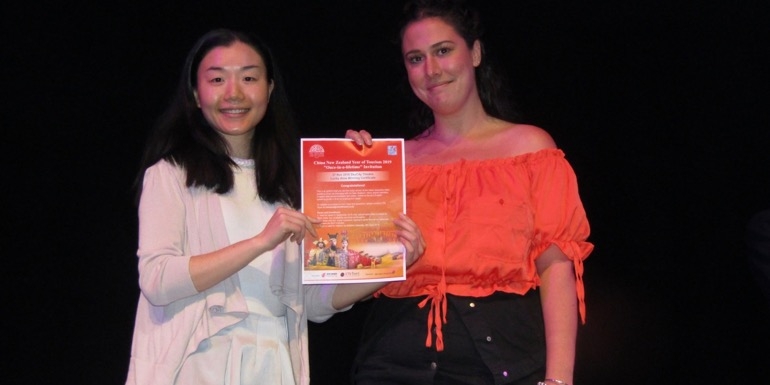 anielle Parker (right), Flight Centre Remuera; was the winner of two economy tickets with Air New Zealand to Xi’an via Shanghai, airport transfers, accommodation, guide, and entrance fees on a Xi’an group tour. She received her prize at the SkyCity theatre from Vivien Gao, CTS Tours

The trade is being urged to help get 1000 Kiwis to Xi’an in September next year around a key event in the China New Zealand Year of Tourism 2019 programme.
CTS Tours, along with co-hosts Air China and Air New Zealand, welcomed nearly 200 agents to a launch of its 2019 brochure and promotion around the 10 September 2019 extravaganza in Xi’an. The agents also had dinner at Spice Alley and watched the City of 100 Lovers musical comedy at SkyCity Theatre.

John McGough, national outbound sales manager with CTS Tours, highlighted seven itineraries in the new brochure that are specifically based around Xi’an and the grand welcoming ceremony organised by China National Tourism.
They include options like Xi’an plus Beijing; Xi’an plus Chengdu plus Yangtze River Cruise and other combinations and choices.
Xi’an is best known for the Terracotta Warriors but also has the most complete ancient city wall surviving in China, as well as the Great Wild Goose Pagoda, and the Shaanxi Provincial Museum.
Patricia Xu, of Air New Zealand, says the carrier will be releasing a special wholesale fare to Shanghai and on to Xi’an for the welcoming ceremony. ‘It will be available through CTS very soon.'

Tweet
More in this category: « Big plans for Centara Uzbekistan visa change »
back to top