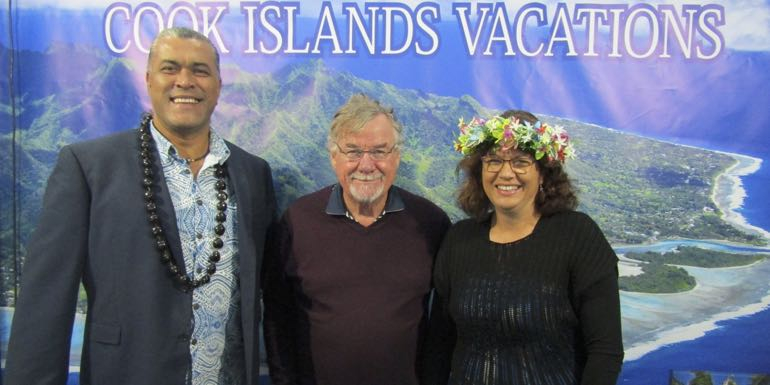 A massive consumer turnout at the Cook Islands Travel Expo in Auckland on Sunday not only illustrated the high level of interest in the destination but also how important it is for agents and brokers to keep abreast of developments there, say participants at the event.

‘People were talking not only about the islands of Rarotonga and Aitutaki but also wanted to know about the outer islands and the differences between them,’ says Alana Eli, New Zealand / Australia represntative with Turama Pacific Travel group, the parent company of Island Hopper Vacations.

‘We had a lot of interest from large multi-generation family groups, with people asking about numbers of 20 to 30. People are really wanting to get away and we have a lot to sell.’

Eli says this gives the trade extra opportunities, but it is important they keep on top of what’s new and exciting so they can add value to their clients’ experiences.

Graeme West, general manager Australasia at Cook Islands Tourism Corporation, says 3300 people registered in advance for the travel show at Hilton Auckland on Sunday and is possible that more than that attended.

Trade registrations for yesterday’s event were also strong, with at least 270 expected to attend.

‘We have more than 50 exhibitors here and consumers have told us that it proves the Cook Islands is a ‘big little destination’.

‘Having activity operators down here has shown that there is a lot to do.’

Temu Okotai, managing director and ‘happiness consultant’ at Cook Islands Tours says that packaging tours and offering orientation and cultural passes is not only convenient for travellers but also helps the trade to increase margins and earn extra commission.

‘We were run off our feet on the consumer day and 70% of our visitors were returnees. They had been to the Cook Islands before and were looking for new things to do.’

Okotai says the company’s most popular product remains a progressive dinner around Rarotonga, where guests visit three homes to enjoy local food and gain an insight into how Cook Islanders live, work and relax.

However, Cook Islands Tours has also added a new experience – The Reefman Tour – officially launched to the market this week. The experience includes a seafood umu which is put down before the group heads out to the reef for an educational tour, and then opened up so they can enjoy the kai when they return.

Liz Raizis, director of sales and marketing at three Cook Islands Resorts says the destination’s consumer travel expo in Auckland on Sunday was the busiest she has attended in over two decades of working travel shows.

Raizis is DOSM for The Rarotongan Beach Resort & Lagoonarium, Sanctuary Rarotonga On The Beach, and Aitutaki Lagoon Private Island Resort. ‘It was non-stop the entire day.’

The Cook Islands is expecting about 12,500 visitors from New Zealand this month, about 70% of the global arrivals the destination recorded in July 2019.

‘That’s very pleasing but it also shows that there is still availability and that gives good opportunities for the trade,’ says Graeme West, general manager Australasia with Cook Islands Tourism Corporation. ‘There is a massive thirst from people to travel between now and November and we believe if we had enough air capacity we would almost do what the global market did in 2019 – and that’s just with New Zealanders.

West says the success of the travel expo on Sunday and enquiries from other parts of the country have encouraged the corporation to replicate the exercise in Wellington and Christchurch, probably later this year. There will be trade components at each event.

Tweet
More in this category: « Niue looks to Q4 Time for return of Coral route? »